As a painter and muralist, Delacroix’s use of expressive brushstrokes and his study of the optical effects of color profoundly shaped the work of the Impressionists, while his passion for the exotic inspired the artists of the Symbolist movement. A fine lithographer, Delacroix illustrated various works of William Shakespeare, the Scottish author Walter Scott and the German author Johann Wolfgang von Goethe.

In contrast to the Neoclassical perfectionism of his chief rival Ingres, Delacroix took for his inspiration the art of Rubens and painters of the Venetian Renaissance, with an attendant emphasis on color and movement rather than clarity of outline and carefully modelled form. Dramatic and romantic content characterized the central themes of his maturity, and led him not to the classical models of Greek and Roman art, but to travel in North Africa, in search of the exotic. Friend and spiritual heir to Theodore Géricault, Delacroix was also inspired by Lord Byron, with whom he shared a strong identification with the “forces of the sublime”, of nature in often violent action.

However, Delacroix was given to neither sentimentality nor bombast, and his Romanticism was that of an individualist. In the words of Baudelaire, “Delacroix was passionately in love with passion, but coldly determined to express passion as clearly as possible.” Together with Ingres, Delacroix is considered one of the last old Masters of painting, and one of the few who was ever photographed.

ugène Delacroix was born on 26 April 1798 at Charenton-Saint-Maurice in Île-de-France, near Paris. His mother was named Victoire Oeben, the daughter of the cabinet-maker Jean-François Oeben. He had three much older siblings. Charles-Henri Delacroix (1779–1845) rose to the rank of General in the Napoleonic army. Henriette (1780–1827) married the diplomat Raymond de Verninac Saint-Maur (1762–1822). Henri was born six years later. He was killed at the Battle of Friedland on 14 June 1807.

There are medical reasons to believe that Eugène’s legitimate father, Charles-François Delacroix, was not able to procreate at the time of Eugène’s conception. Talleyrand, who was a friend of the family and successor of Charles Delacroix as Minister of Foreign Affairs, and whom the adult Eugène resembled in appearance and character, considered himself as his real father. Throughout his career as a painter, he was protected by Talleyrand, who served successively the Restoration and king Louis-Philippe, and ultimately as ambassador of France in Great Britain, and later by Talleyrand’s grandson, Charles Auguste Louis Joseph, duc de Morny, half-brother of Napoleon III and speaker of the French House of Commons. His legitimate father, Charles Delacroix, died in 1805, and his mother in 1814, leaving 16-year-old Eugène an orphan.

His early education was at the Lycée Louis-le-Grand, and at the Lycée Pierre Corneille in Rouen where he steeped himself in the classics and won awards for drawing. In 1815 he began his training with Pierre-Narcisse Guérin in the neoclassical style of Jacques-Louis David. An early church commission, The Virgin of the Harvest (1819), displays a Raphael-esque influence, but another such commission, The Virgin of the Sacred Heart (1821), evidences a freer interpretation.[9] It precedes the influence of the more colourful and rich style of the Flemish Baroque painter Peter Paul Rubens, and fellow French artist Théodore Géricault, whose works marked an introduction to Romanticism in art.

The impact of Géricault’s The Raft of the Medusa was profound, and stimulated Delacroix to produce his first major painting, The Barque of Dante, which was accepted by the Paris Salon in 1822. The work caused a sensation, and was largely derided by the public and officialdom, yet was purchased by the State for the Luxembourg Galleries; the pattern of widespread opposition to his work, countered by a vigorous, enlightened support, would continue throughout his life. Two years later he again achieved popular success for his The Massacre at Chios.

Delacroix’s painting of the massacre at Chios shows sick, dying Greek civilians about to be slaughtered by the Turks. One of several paintings he made of this contemporary event, expressed the official policy for the Greek cause in their war of independence against the Turks, war sustained by English, Russian and French governments. Delacroix was quickly recognized by the authorities as a leading painter in the new Romantic style, and the picture was bought by the state. His depiction of suffering was controversial, however, as there was no glorious event taking place, no patriots raising their swords in valour as in David’s Oath of the Horatii, only a disaster. Many critics deplored the painting’s despairing tone; the artist Antoine-Jean Gros called it “a massacre of art”. he pathos in the depiction of an infant clutching its dead mother’s breast had an especially powerful effect, although this detail was condemned as unfit for art by Delacroix’s critics. A viewing of the paintings of John Constable and the watercolour sketches and art of Richard Parkes Bonnington prompted Delacroix to make extensive, freely painted changes to the sky and distant landscape.

Delacroix produced a second painting in support of the Greeks in their war for independence, this time referring to the capture of Missolonghi by Turkish forces in 1825. With a restraint of palette appropriate to the allegory, Greece Expiring on the Ruins of Missolonghi displays a woman in Greek costume with her breast bared, arms half-raised in an imploring gesture before the horrible scene: the suicide of the Greeks, who chose to kill themselves and destroy their city rather than surrender to the Turks. A hand is seen at the bottom, the body having been crushed by rubble. The painting serves as a monument to the people of Missolonghi and to the idea of freedom against tyrannical rule. This event interested Delacroix not only for his sympathies with the Greeks, but also because the poet Byron, whom Delacroix greatly admired, had died there.

A trip to England in 1825 included visits to Thomas Lawrence and Richard Parkes Bonington, and the colour and handling of English painting provided impetus for his only full-length portrait, the elegant Portrait of Louis-Auguste Schwiter (1826–30). At roughly the same time, Delacroix was creating romantic works of numerous themes, many of which would continue to interest him for over thirty years. By 1825, he was producing lithographs illustrating Shakespeare, and soon thereafter lithographs and paintings from Goethe’s Faust. Paintings such as The Combat of the Giaour and Hassan (1826), and Woman with Parrot (1827), introduced subjects of violence and sensuality which would prove to be recurrent.

These various romantic strands came together in The Death of Sardanapalus (1827–28). Delacroix’s painting of the death of the Assyrian king Sardanapalus shows an emotionally stirring scene alive with beautiful colours, exotic costumes and tragic events. The Death of Sardanapalus depicts the besieged king watching impassively as guards carry out his orders to kill his servants, concubines and animals. The literary source is a play by Byron, although the play does not specifically mention any massacre of concubines.

Sardanapalus’ attitude of calm detachment is a familiar pose in Romantic imagery in this period in Europe. The painting, which was not exhibited again for many years afterward, has been regarded by some critics as a gruesome fantasy involving death and lust. Especially shocking is the struggle of a nude woman whose throat is about to be cut, a scene placed prominently in the foreground for maximum impact. However, the sensuous beauty and exotic colours of the composition make the picture appear pleasing and shocking at the same time.

A variety of Romantic interests were again synthesized in The Murder of the Bishop of Liège (1829). It also borrowed from a literary source, this time Scott, and depicts a scene from the Middle Ages, that of the murder of Louis de Bourbon, Bishop of Liège amidst an orgy sponsored by his captor, William de la Marck. Set in an immense vaulted interior which Delacroix based on sketches of the Palais de Justice in Rouen and Westminster Hall, the drama plays out in chiaroscuro, organized around a brilliantly lit stretch of tablecloth. In 1855, a critic described the painting’s vibrant handling as “Less finished than a painting, more finished than a sketch, The Murder of the Bishop of Liège was left by the painter at that supreme moment when one more stroke of the brush would have ruined everything”.
Delacroix’s most influential work came in 1830 with the painting Liberty Leading the People, which for choice of subject and technique highlights the differences between the romantic approach and the neoclassical style. Less obviously, it also differs from the Romanticism of Géricault, as exemplified by The Raft of the Medusa.

Delacroix felt his composition more vividly as a whole, thought of his figures and crowds as types, and dominated them by the symbolic figure of Republican Liberty which is one of his finest plastic inventions.
Probably Delacroix’s best-known painting, Liberty Leading the People is an unforgettable image of Parisians, having taken up arms, marching forward under the banner of the tricolour representing liberty, equality, and fraternity. Although Delacroix was inspired by contemporary events to invoke this romantic image of the spirit of liberty, he seems to be trying to convey the will and character of the people, rather than glorifying the actual event, the 1830 revolution against Charles X, which did little other than bring a different king, Louis-Philippe, to power. The warriors lying dead in the foreground offer poignant counterpoint to the symbolic female figure, who is illuminated triumphantly, as if in a spotlight.

Christ on the Sea of Galilee, 1854
Although the French government bought the painting, officials deemed its glorification of liberty too inflammatory and removed it from public view. Nonetheless, Delacroix still received many government commissions for murals and ceiling paintings.

Following the Revolution of 1848 that saw the end of the reign of King Louis Philippe, Delacroix’ painting, Liberty Leading the People, was finally put on display by the newly elected President, Louis Napoleon (Napoleon III). It is exhibited in the Louvre museum in Paris; although from December, 2012 until 2014 it was on exhibit at Louvre-Lens in Lens, Pas-de-Calais. 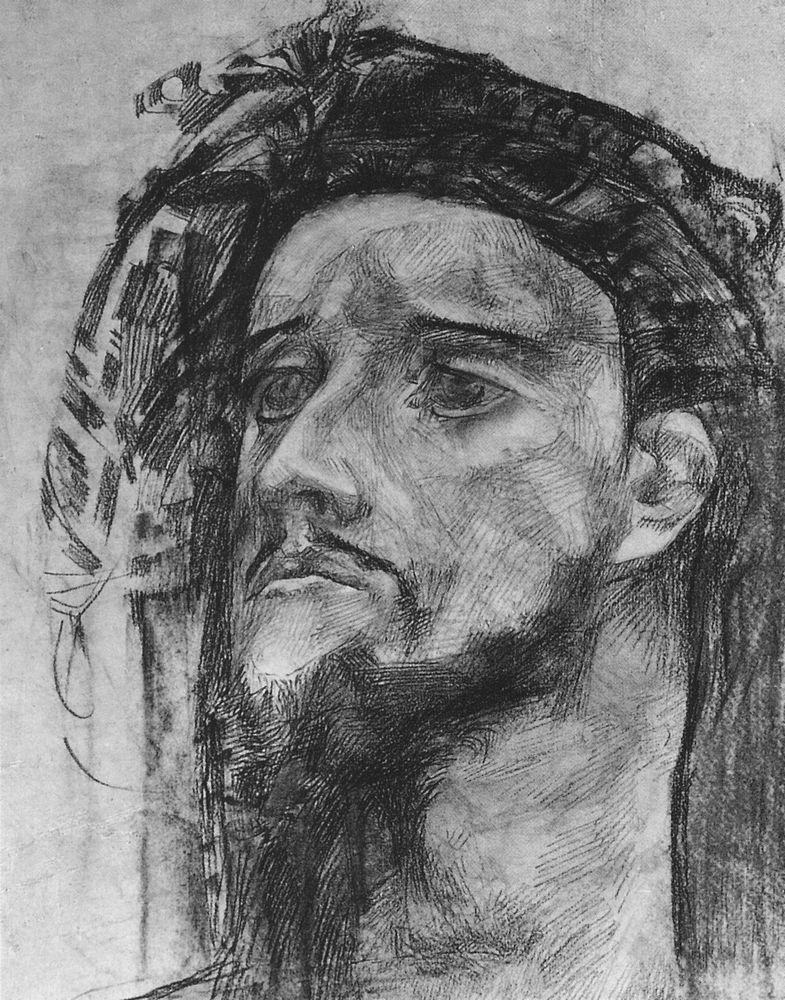