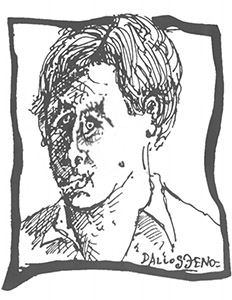 I was born on a Friday in the name of Kos. According to the popular belief, the children born at that time will either be lucky or foolish. Luck was next to me, and I came across as a cartoonist. At the same time I am a “court fool”. I have a way to show freaks about abuses, roughness, disobedience, sadness, and so far death. I had exhibitions around the world. Since the cartoon is a visually-displayed story, my drawings are self-contained, without words (my story!). That is why they prevail in any language area of ​​the world.
I have won 33 awards for international cartoon shows. Some of these are: Montreal, 1970, III. fee; Novi Sad, 1972, 1st prize, Marostica (Italy), 1974, Grand Prix; Tokyo, 1981, Best Artist Award; Gabrovo, 1985, House of Humor and Satisfaction.
Of course, I was present at many exhibitions in Hungary. I raise three of my Hungarian prizes: I. National Carikatúrabienzné Nívódíja, 1983; Grand Prize of the Association of Hungarian Fine Arts and Applied Arts and Fine Arts Lecturer at the 1987 Biennale, Hungarian Press Bureau, 1999; Cartoon of the Year …
I participated in several group caricature exhibitions: Young Artists Club, 1970 (3 persons); Hammer Gallery European Center (Berlin), 1980; Erlangen, 1983 (4 people); Hungarian Institute of Helsinki, 1985 (3 persons); Linz, Hungarian Institute, 1985 (3 persons); Landau BMW Culture Program, 1985 (4 people); Burgenland Cultural Center, 1986 (4 people); Hungarian Days, Monterrey University, 1986 (4 people); Collegium Hungaricum und Burgenländisches Kulturzentrum, 1986 (4 persons); Willach, 1987 (4 persons); Ernst Museum, 1987 (3 people).
National cartoon exhibitions: Műcsarnok (1967, 1979, 1985), Museum of Fine Arts (1970), Ernst Museum (1975), National Gallery (1990).
Many of my cartoons are owned by the following collections: Cuba, Hum Museum (1 drawing), Sammlung Caricature & Cartoon Basel Collection De Caricatures (6 drawings), Montreal, Humor Pavilion (2 drawings), West Berlin Europa Center, Hammer Collection (2 drawings) , Marostica Castle Museum (5 drawings), Beringen (Belgium) Kulturcentrum (1 drawing), Workers’ Movement Museum (3 drawings), Asti Wine Museum (2 drawings), Hungarian Military History Museum (11 drawings), Ancona Museum of Physical Education and Sport drawing).
At the age of twenty-seven I went to the Ludas Matyi page, where I worked for 23 years as an internal worker until the lap disappeared. It is about the joke of Ludas Matyi, which was published in 640,000 copies in its light. This is the world’s peak compared to the country’s population.
Among other things, Ludast was famous for such great names as György Várnai, József Szűr-Szabó, István Hegedűs (HIHI), Anna Vasvári, Balázs Balázs Piri, Ferenc Sajdik. They are all special individuals. I really liked working with György Brenner and István Lehoczki (LEHO).
Neither of us has taught cartoon layout. In addition to drawing skills, humor and problem sensitivity are needed. I LOVE YOU, MY FRIENDS HAVE MEANED! Occasionally, a guiding title will make the reader’s experience more secure. The mindset and style make the drawing personal. At the same time, constant development, change does not mean insecurity, indeed!
In addition to Ludas, I have appeared in several other papers. Without the utmost necessity, I highlight the pages of Criticism, New Mirror, Freedom, Free Earth, Hungarian Newspaper. I worked for the Today Day, Private Profit, Business Week for a long time. It was a pleasure for me to have my children’s sheets printed.
It also seems to me that I have moved from scratch to a wide range of topics. Environmental protection was a priority, which at that time was not at all a constant topic, as fortunately it later became. One of the foreign prizes I got with my drawing on this subject.
I highlighted the importance of environmental protection in the 1980 cargo stamp I designed. In 1982 my philatelic wall flow appeared with my stamp cartoons. The specialty of this is that the stamps have been glued one by one to the calendar that came out of the press.
I have seventeen books, mostly published in the seventies and eighties: Adam und Eva (Corvina-Eulenspiegel, 1977) in German and Hungarian; ABC abusive (Móra, 1977); Misleading Military Lexicon (Zrínyi, 1979), Krix and Krax (Móra, 1978); Tréfás KRESZ (Móra, 1979), SOS (Corvina, 1979); Illustrated public ABC (Gondolat, 1983), Linear Parade (Zrínyi, 1982); Santa Claus among Animals (Móra, 1982).
MTV commissioned two environment-themed cartoons: S.O. S. (1982) and Smog (Pannónia Filmstúdió, 1986).

Between 1983 and 1988, Kner Print produced five miniseries.
It was a great deal to me that at the beginning I enjoyed the encouragement of István Kormos and Éva A. Aszódi at Móra Publishing. Later, there was a pleasant working relationship between us.
At the 2008 book festival I was very pleased to dedicate my volume to Csinnadratta. This book was designed to have been my circus drawings for twenty years now when I took them to Móra Kiadó. The editors – namely Péter Dóka, editor in charge of the volume – selected the matching poems for the finished drawings. That’s why many people wrote that it was a “reverse book”. As a result of the fine selection, Apollinaire, Mihály Babits, István Csukás, Dezső Kosztolányi, János Lackfi, János Pilinszky, János Romhányi and Sándor Weöres were included in the book.
I am convinced that the circus world is not just about the child’s fantasy. We, grown up from the end of the last century and the 21st century, In the 18th century, we are increasingly circus actors. That is why I think about the present age – after Shakespeare’s free – that circus is the whole world, circus actors in it all men and women. This is the cartoonist paraphrase of a cartoonist who has not been “going” for a long time in the 1960s on my career, “my hopes and workmanship”.