Gonzalez Castrillo, José María, spanish cartoonist born in San Sebastian, Spain, in 1923. Jose María Gonzalez worked first as a house painter and was then an office clerk for some years. His career as a cartoonist started in 1957, when his work began appearing under the pseudonym “Chumy-Chumez” in La Codorniz, the most important satirical magazine of the postwar years. In subsequent years Chumy-Chumez’s cartoons were published in all the major Spanish magazines—Triunfo. La Gaceta Ilustrada. El Hermano Lobo, etc.—making him one of the most recognized cartoonists in Spain. Chumy-Chumez has received a number of awards, including one at the International Humor Exhibition in Montreal. He has also published several books; one of these, a fictional autobiography in cartoons, has seen print not only in Spain but also in France. Italy, Greece and the United States.

One of the most creative of Spanish cartoonists, Chumy-Chumez often does collages as well as drawings. His work displays a peculiar humor midway between satire and social criticism, with a lot of crazy inventions thrown in. His cartoons have been called “sub-realistic,” and their interpretation is often a matter of vociferous debate. Chumy-Chumez now uses a sun as his trademark, and it has become almost as popular as the cartoons themselves. 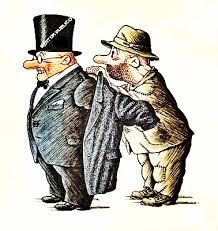