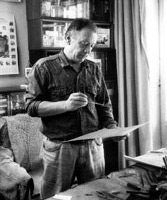 He was born on September 26, 1935 in Moscow in a family of employees. At the age of 4, he moved from Moscow, during the evacuation, to the village of Krestovo-Gorodishche and studied at a rural school for three years (from August 1941 to April 1944)[2]. In 1953 he graduated from Moscow Secondary School No. 103. In 1952 he began working for the newspaper “Housing Worker”, where he received his first experience as a cartoonist. In 1953-1958 he studied at the Moscow Polygraphic Institute at the art department. It is known that his best friend was Nikolai Borisov.

Since 1960 he has illustrated books in the publishing houses “Malysh”, “Children’s Literature”, “Fiction” and others.

The artist’s works are in the collection of the Pushkin State Museum of Fine Arts.

For many years he suffered from color blindness, but despite this, he created the mascot of the 1980 Olympics in Moscow – the Olympic Bear.

Copyright for the mascot of the Olympic Games in Moscow:

In 2010, he sued the NTV television company on the issue of copyright ownership of the Olympic bear Misha.

The courts concluded that Chizhikov had developed a two-dimensional sketch of an Olympic bear cub. Based on Chizhikov’s sketch, variants of the interpretation of the 1980 Olympics mascot were developed: contour, silhouette (artist V. Stupin), by sports (artist E. Migunov); as well as its solution in volume (artist V. Ropov). Due to the fact that the “three-dimensional” bear has a three-dimensional belt with Olympic rings, a modified design due to the volume, the image of the bear from the back, the courts considered that this work, created by processing the plaintiff’s work, is independent. By virtue of Article 492 of the Civil Code of the RSFSR of 1964, which was applied in 1980, the copyright for this work is owned by the person who processed it.

The decision of the Presnensky District Court of Moscow, left unchanged by the ruling of the judicial board for civil cases of the Moscow City Court, refused to satisfy the stated requirements.