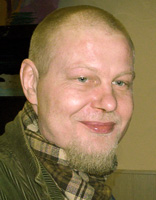 He was born on January 31, 1964 in Moscow.
Graduated in 1987 Moscow Institute of Electronic Engineering.
The first caricature was published in the Moscow Komsomol in 1989. From 1990 to 1995 he lived in the Netherlands, where he published the newspaper Volkskrant.
In 1992, a book of drawings was published in Amsterdam.
Published in the “Moscow News”, “Truda”, “Arguments and Facts”, “New Time”, “Crocodile”, etc.
Member of the club of cartoonists “Dilettante” newspaper “Moskovsky Komsomolets.”