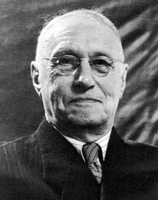 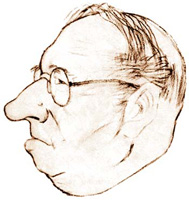 He graduated from the Tomsk gymnasium, was friends with N. Kotov. He studied drawing with the famous artist S. M. Prokhorov, who consistently followed the principles of his mentor P. P. Chistyakov in the method of teaching drawing.

In 1911-1917 he studied at the MUZHVZ (Moscow School of Painting, Sculpture and Architecture) with K. A. Korovin and S. V. Malyutin.

After the October Revolution, during the Civil War, he created propaganda posters (“… We must be ready”, “So that a knife falls out of this paw, the anti-fascist front forces multiply!”). In 1919, he performed the first “Window of Growth”.

In 1918, he figured out the structure of the bells, the score of the Kremlin chimes and, in accordance with Lenin’s wishes, scored revolutionary melodies on the playing shaft of the chimes.

In 1949-1962 he taught at the Moscow State Pedagogical Institute named after V. I. Surikov. Collaborated with such magazines as “The Godless at the machine”, “Smekhach”. The author of the Anti-Religious alphabet. Full member of the USSR Academy of Sciences (1958).

He died on August 17, 1962; he was buried in Moscow in the columbarium of the Novodevichy Cemetery.

The first wife is Raisa Dmitrievna Vinogradova. The second wife, Nina Alexandrovna, was the author of texts for her husband’s posters; after his death, she wrote a book of memoirs about him (Moscow: Soviet Artist, [1965]. — 192 p. : ill.).