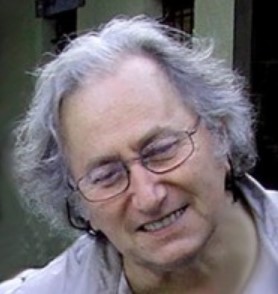 30 May, 1947Rene Boucher, aka “Herbie Kezaco” or “R *B”, was born on May 30, 1947 in Bessège in the south of France in a family of miners. At the age of 17, after graduating from school, he received a primary school teacher’s certificate. He then continued his studies at the University of Bordeaux and at the University of Montpellier, where he received a degree in psychology. Then he held various positions: an educator in an orphanage abroad, a teacher in a private school, a lifeguard, a physical education teacher, a psychomotor, an observer for disabled children, etc. He became a teacher at an institution for mentally retarded children, and then became a CAT (Help Through Work Center) for Mentally Retarded teenagers and adults. Rene Boucher has been drawing since early childhood. Currently, you can see his poetic works on various sites on the Web. With the help of the Internet, he discovered the area of freedom in 1997. He draws and collaborates in numerous publications on the Internet, periodicals, fanzines, posters, various French newspapers and magazines or exhibitions of digital drawings. To publish his images at world events, he created “Kezako Weekly”. He participated in international cartoon contests, and his works were awarded prestigious prizes. Due to heart disease, Rene Boucher no longer participates in exhibitions of drawings, but only via the Internet, in all countries of the world that agree to exhibit his works. But – at home – he continues to draw for friends and clients: book covers, CD covers, book illustrations, T-shirts, posters, calendars, postcards, etc. Rene Boucher lives and works in Avez–Les-Vigan, France. 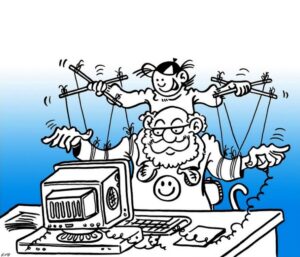 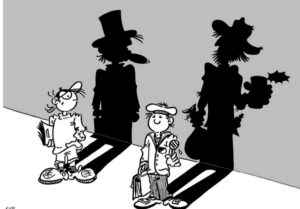