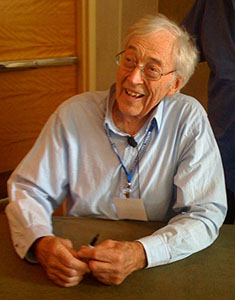 Born in Fairfax. Missouri, USA, on June 28, 1926. George Booth graduated from Fairfax High School in 1944 and en­listed in the Marine Corps. After basic training at Camp Lejeune, he was assigned to a Corps printing operation as a result of some previous experience in lithography. It was during this assignment that his talent for caricature was noticed by his commanding officer. Shortly thereafter, he was transferred to Wash­ington and assigned to the staff of the Leather­neck, the Corps newspaper, as a cartoonist.
After his discharge he entered the Chicago Academy of Art, but upon the outbreak of the Korean conflict he was recalled to active duty. Once again he was assigned to the Leatherneck. Discharged a second and final time, he enrolled in the Corcoran School of Art in Washington. D.C.. before moving to New York, where he completed his education at Adelphi Univer­sity on Long Island. Booth worked for a New York based communications firm for eight years before deciding in the early 1960s to try his hand as a freelance cartoonist. This gamble paid off when he landed the prestigious position of staff cartoonist at the New Yorker and set about familiarizing readers of that magazine with his memorable dogs, cats and people.
Like all the most interesting cartoonists, Booth not only has a distinctive style but also a particular cos­mos to which he returns again and again for the raw stuff of his humor. His comic talent is thus accented by the element of familiarity he introduces through the recurrent use of certain images: the dogs and cats; a lower-class philosopher who thinks best in the bathtub; the neo-Goldbergian inventions; the fiddling Granny and her ensemble; and the miserable old couple in a cluttered, deteriorating flat, forever ex­changing the most unlikely observations. Booth’s selection of images, along with his highly idiosyncra­tic rendering of them, creates a sense of déja vu which makes his already funny drawings even more hilarious.

Booth is an exceptionally collectible artist, to date having published two volumes of his work, taken mainly from the New Yorker. They are “Think Good Thoughts About a Pussy Cat” and “Rehearsal’s Off” (1978).