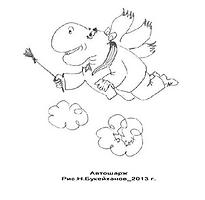 He was born on October 13, 1940 in Alma-Ata, Kazakh SSR (Kazakhstan) in the family of an editor of pedagogical literature Bukeikhanov Raimzhan Azikhanovich and a housewive Bukeykhanova Khairiya.
He graduated from the Kirov Kazakh State University (Chemistry Department).
Worked as a senior research fellow at the Institute of Chemical Sciences of the Academy of Sciences of the Kazakh SSR (Alma-Ata, Kazakhstan) in 1969-1985; a pro-rector on scientific work of Aktyubinsk Pedagogical Institute (Aktobe, Kazakhstan) in 1985-1989; a head of the Institute of Petroleum Chemistry and Natural Salts of the National Academy of Sciences of the Republic of Kazakhstan (Atyrau, Kazakhstan) in 1989-1993; a deputy director of the Laser Center of JSC “High Technologies” (Alma-Ata, Kazakhstan); a deputy director of the Egorievsk Technological Institute (branch of the Moscow State Technological University “STANKIN”), Egorievsk, Moscow Region) in 1994-2001.
His first cartoon was published in 1961 in the children’s magazine “Baldyrgan” (“Rostok”, Kazakhstan).
Then he regularly published his “humor without words” in this magazine until 2000.
His works also was published in a satirical magazine “Ara” (Kazakh magazine) and “Shmel” (the same magazine in Russian) (1970 to 1980).

He is a participant of the cartoon competition of the 2nd International Biennale, 1972 (Gabrovo).
In 2011, the House of Humor and Satire in Gabrovo accepted as a gift more than 200 his humorous, satirical and graphic works and also a book of his poems (N. Bukeykhanov “Poems and Graphics”, 2010).
He is a prize-winner of the competition by children’s magazine “Baldyrgan” (Kazakhstan).
He held 3 solo exhibitions in Atyrau (Kazakhstan) in 1992.
Three author’s collections of cartoons for children have been published:
1) “TAPKYR TAYBEK” — “The resourceful Taybek”, humor without words, 1968;
2) “KONILDI COLLARS” — “Good laughter”, humor without words, 1970;
3) “KONILDI BEGEMOT” — “Merry Behemoth”, humor without words, 1985.

He is an author of 3 monographs on chemistry, more than 80 scientific articles on chemistry, ecology and economics.
He received 20 patents on organic synthesis and chemical engineering.
Collected poems: “From heart to heart. Lyrics” (2001), “The Bukeykhanovs. Selected poems and drawings” (2003), “When inspiration comes” (2005), “Poems and Graphics” (2010).