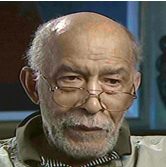 Brown Robert,   American cartoonist born in Pennsylvania in 1906. Robert (“Bo”) Brown attended the University of Pennsylvania, graduating in 1928. He planned on a career as an attorney and was a law school student when the Saturday Evening Post accepted one of his drawings; he renounced forthwith the perquis­ites of the “Philadelphia lawyer” to become a gag cartoonist, a vocation he has been pursuing success­fully ever since. Working in ink. lines and washes. Brown calls cartooning a “relaxing” profession and claims to do his best work when he is tired.

Brown’s style is adequate to his purpose but hardly distinctive, being a derivative melange of the early 20th-century styles upon which he was raised. His gag lines are generally acceptable, but much of his humor is topical and without noticeable bite or recur­rent imagery, and so does not stand up as well as the humor of the greatest of his contemporaries-artists like Peter Arno or George Price. When he avoids the topical and exploits the cliche, Brown is at his best.

For example, in a late-1940s panel a prospective cus­tomer points angrily to his children, sitting rapt be­fore the console radio, and exclaims to the television salesman who has dropped by to make a pitch, “You mean I’ll even have to look at Oatsy-Woatsies?” In this case, Brown proved rather prophetic, for it was precisely “Oatsy-Woatsy”-supported television pro­gramming that ultimately killed off the mass- circulation general-interest weeklies like the Post and Look that provided the main market for his bland, middle-of-the-road art and humor. 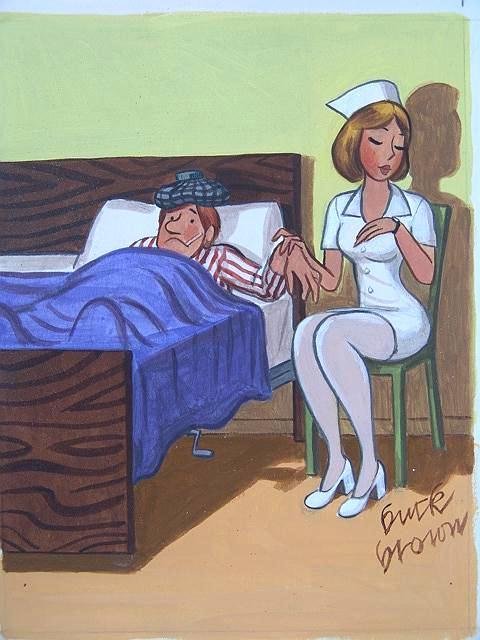 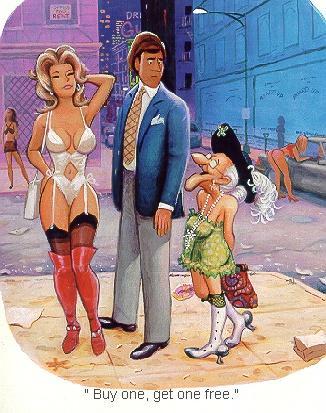 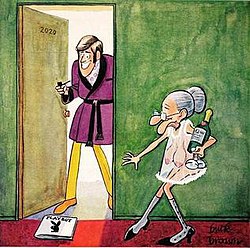