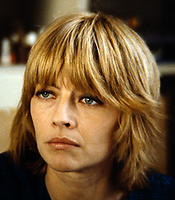 French cartoonist born in Nantes, a town in western France, in 1940. Claire Bretecher, who describes herself as the daughter of “a bourgeois family with no money,” was educated in a Catholic convent and later studied fine arts. After failing to get a job as an art teacher, she went to Paris in the early 1960s. She started her cartooning career in 1964 with the weekly magazine Record, to which she contributed spot cartoons and illustrations as well as a short-lived comic strip, Molgaga, about a court jester.
Moving to the Belgian weekly Spirou in 1968, she drew two new but unsuccessful comics Les Gnan-Gnans (a kid strip) and Les Naufrages (“The Castaways”). Her first success came in 1969 with Cellulite, a hilarious comic strip about a homely spinster princess, which was created for Pilote. Bretecher received further recognition when the intellectual magazine Le Nouvel Observateur asked her to create a weekly satirical strip for them. This turned out to be Les Frustres (“The Frustrated Ones”), a savage, brilliant, often bitter indictment of modern civilization and the whole human race.
Claire Bretecher is the only European woman cartoonist whose professional fame is equal to that of her male colleagues. She is a writer, an illustrator and an editor as well as a successful cartoonist. She has received many distinctions and awards, and her fame has reached American shores: her cartoons have appeared in Esquire and Ms. magazine, and she was the subject of a 1977 article in the New York Times. A collection of her cartoons titled The National Lampoon Presents Claire Bretecher was published in New York in 1978.