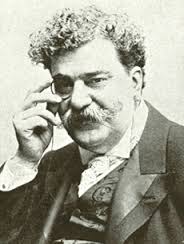 Born in Lisbon, Portugal, on March 21, 1846. Rafael Bordallo was born into a family of artists—his father, brothers and sons distinguished themselves in engraving, painting, sculpture, drawing, and the decorative and ceramic arts. He studied at the Academy of Fine Arts from 1868 to 1874. At first attracted to dramatic acting, he performed in the Garrett Theatre but soon abandoned this career. After his marriage in 1866, Bordallo began drawing and illustrating anecdotes. He started caricaturing in 1870 with a lithograph called “O Dente da Baronesa.” In the same year he published the album Calcanhar de Aquiles, in which great literary personalities of the time were satirized, and started O Binoculo, a magazine of theatrical criticism, of which four numbers were issued. In 1870 and 1871 he sold seven pages of A Berlin da, a series of humorous notes of social events. In 1872 Bordallo published an album totally illustrated in comic strip form, thus becoming the creator of the Portuguese comic strip. Titled Apontamentos Sobre a Pica resca Viagem do Imperador de Rasilb pela-Europa (“Notes on the Roguish Voyage of the Emperor of Rasilb Through Europe”), it was a satire on the Brazilian emperor, and it went through three printings.
In 1875 Bordallo started the magazine Lanterna Mágica, where for the first time the typical figure of the poor and exploited Portuguese, “Ze Povinho,” appeared: in 1876 he published the Album de Caricaturas-Frases e Anexins da Lingua Portuguesa. Meanwhile he published several independent lithographs and three volumes of the Almanaque de Caricaturas (1874-76), where he returned to the comic strip format. Also in 1876 he emigrated to Brazil, where he often worked for the magazines Besouro (1976), Mosquito (1877) and Pst (1879). Following a mysterious brawl in which he was stabbed, Bordallo returned to Portugal in 1879. Thereafter several illustrated anecdotes, caricatures and comic strips that gave him even greater fame appeared in Antonio Maria (1879), Album das Glorias (1880), Pontos nos lis (1885) and A Parodia (1900); he drew for the latter until his death on January 23, 1905. It is remarkable to find in some of his cartoons produced after 1880 the use of balloons and onomatopoeia. Iconic signs can be found as far back as 1874.
Bordallo participated widely in the illustration of books, magazine covers, and decorated menus, apart from hundreds of separate lithographs and his sketches of the first Portuguese artistic posters. He also worked for the Illustración Española y Americana and the Illustración de Madrid, two Spanish magazines, and from 1873 for the Illustrated London News. He directed the construction of the Portuguese pavilion in the Paris Exhibition of 1889. where he displayed some of his ceramics, the main artistic activity of the final phase of his career. There is a museum in Lisbon that bears Bordallo’s name: here the several branches of his work, including drawings, caricatures, illustrated newspapers, lithographs and ceramics, are exhibited. 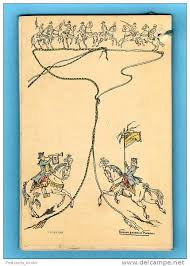 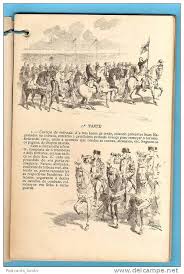