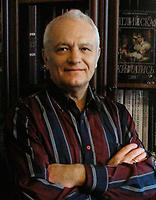 He was born on April 9, 1946 in Ukraine. Graduated from the Leningrad Higher Art and Industrial School named after V. I. Mukhina.
Worked as the head of the department of artistic design of the “Evening Leningrad” newspaper, the main artist and director of “Lenizdat”, the director of the “Santa” publishing house.
Since 1998 he is a CEO of the publishing house “Aurora”.
He is s master of the Russian cartoon, for many years collaborated with the “Crocodile”magazine, a famous illustrator of children’s books. He illustrated books of prose and poetry (“The Princess on a Pea” by G.-H. Andersen, “Phone” by K. I. Chukovsky, “Crocodile Gena”, Cheburashka and others”).
Genuine recognition came to him with “The Adventures of Captain Vrungel” by A. Nekrasov (Lenizdat 1982).
He is a participant of Russian and international exhibitions, a laureate of the “Art of the book” professional competition, a professor.
He is a member of the Union of Artists, the Union of Designers, the Union of Journalists, as well as the International Association of Art Critics.