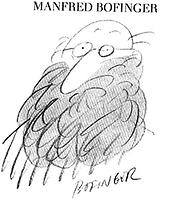 Born in Berlin, Manfred Bofinger was a notable cartoonist and caricaturist from the former DDR. After his studies at the Grauen Kloster gymnasium in Berlin, he studied to become a typesetter for two years. Between 1961 and 1968 he worked in that occupation for the satirical magazine Eulenspiegel. A self-taught artist, he also began working as cartoonist and book illustrator. His work appeared not only in Eulenspiegel, but also in the children’s magazine Frösi. Bofinger illustrated over 300 children’s books. In the 1970s and 1980s he was present in the annuals of Kinderbuchverlag Berlin with the comic ‘Albert’s Bunte Bilderbude’.