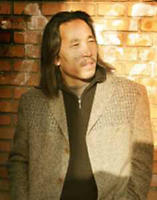 He was born in 1965 in Inner Mongolia Aotonomous Region of China. Member of the Inner Mongolia Association for Artists. Now he is a teacher at the Sunid Left Banner Profession School.