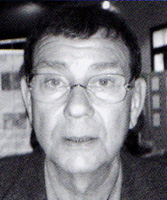 Born in 1945 in France. He worked as a dentist, but since childhood was a big fun of cartoon. With over 5000 books in his library he is one of the world most famous collectors of cartoon publications. Also he wrote a lot of articles for the magazines in France and abroad and collaborated on a capital monograph “5000 cartoonists and 600 magazines in France from Daumier until today” (1996 and 2004). He was a member of the Jury of Zemun International Salon of Caricature (2001, 2002 and 2009).