Welsh cartoonist born in Newport, Monmouthshire, in 1883. “Arf a mo’, Kaiser!” was the caption to one of the most famous cartoons in British history. Bert Thomas whipped it off in ten minutes flat—a scribbled sketch showing a typical Tommy Atkins pausing to light his pipe before marching off to war. It caught the spirit of the times like no other cartoon, the cheerful Cockney spirit in the face of awful adversity. It was drawn for the Weekly Dispatch in 1914, for that newspaper’s fund to provide the British troops with tobacco and cigarettes. It worked wonders and was reprinted enough times for Thomas to have retired—had he charged a royalty! It collected at least £250,000 for the campaign, nothing for Thomas. Nor, curiously, was Thomas a Cockney.

Bert Thomas was one of 7 children of Job Thomas, a sculptor, and at the age of 14 he was apprenticed to an engraver in Swansea. He soon began to sketch for a living, however, and came to London to work in an advertising agency. He quickly became the art director, and in his spare time he dashed off joke drawings for the many weekly papers and comics of the day. among them Pick-Me-Up and Ally Slopnr’s Half- Holiday. Soon hе was the political cartoonist on London Opinion. Came World War I, and Thomas enlisted in the Artists’ Rifles, executing England’s largest-ever poster, a gigantic cartoon for the war savings campaign that all but covered the face of the National Gallery. After the war he began cartooning jokes for Punch and by the end had contributed over one thousand to that paper alone.

It was after the war, too, that Thomas’s style developed into the one he is best remembered by.

Abandoning the pen, he deliberately used an old matted brush on the rough surface of a Whatman board to produce an “instant” speed technique. He also developed an interesting two-color cartoon series for the Sketch, reproduced in red and black. His untidy line was especially good at capturing Cockney life and laughter, and he illustrated readers’ contributions to the London Evening News, under the heading “Cockney War Stories,” through the 1930s and into World War II. He died on September 6, 1966. 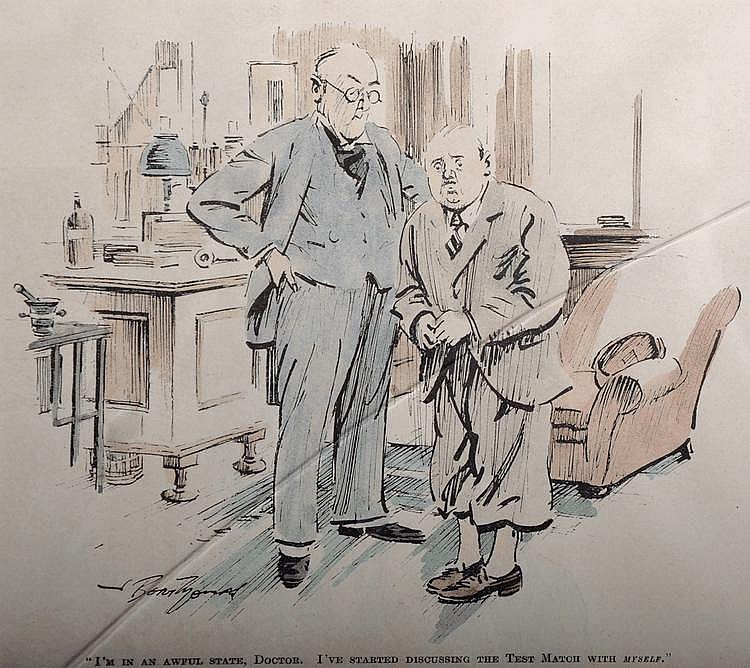