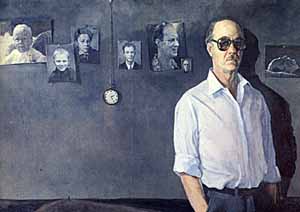 Graduated from the staging faculty of the Moscow Art Theater School (1949-1953) and the theater studio of the Surikov Institute (1950-1958).
For 35 years he worked as a theater artist, participated in the creation of 150 performances in various theaters of the country.
He was the main artist of the Theater. NV Gogol, and then, until the end of his life – the Central Theater of the Soviet Army.
He painted landscapes of the central strip of Russia.
He also created a lot of works, where he portrayed Stalin’s repressions metaphorically.