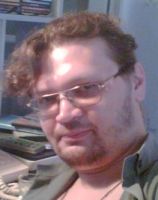 He was born in 1973 in the town of Valuiki, Belgorod region. In 1976 he moved to Stary Oskol, Belgorod region. He drew the first caricature in 12 years. Began to be published in local publications. Later there were publications in the magazines “Crocodile”, “Chayan”, “Pachemish” and other media.
Hobby: computer games and emulation.
Member of the editorial board of the electronic magazine “Game Bit” and the administrator of the site / forum