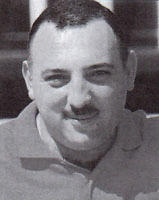 He was born in Baku in 1972.
In 1994 he graduated from Azerbaijan State University of Art and Culture, faculty of producers.
He paints cartoons since 1992, his cartoons have been pub¬lished in “Kirpi” (Hedgehog) magazine.
He has taken part in many exhibitions in the Republic.
His private exhibi¬tion was opened in Baku.
He is the publisher of “Gallery” magazine since 2004. He is the member of Azerbaijan Cartoonists’ Union from 2006.
He is the member of Azerbaijan group in FECO (FEderation of Cartoonists Organisations).