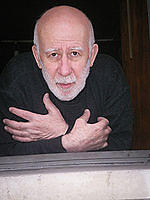 July 23, 1938, Kharkov, Ukraine – November 12, 2009, New York, USA
In 1957 he entered the Kharkov Studio of Decorative Arts, where he studied with Vasiliy Ermilov – known in the 1920s as an avant-gardist.
He moved to Moscow in the mid-60’s. In 1967-1974 he worked in the department of humor of the Literary Gazette. Collages Bakhchanyan published in the journals “Knowledge – Power” and “Youth”. He emigrated to the United States in 1974. The author of many aphorisms, which are included in Russian folklore. Laureate of the World Contest of Cartoonists.