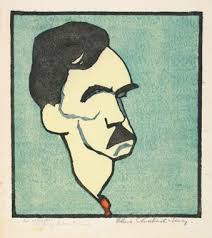 Auerbach-Levy William, american caricaturist, painter, etcher and author born William Auerbach in Brest-Litovsk, Russia, in 1889. His parents adopted the surname Levy after they emigrated to the United States when he was five.

His artistic ability was recognized by a teacher in the elementary school he attended in New York City’s Lower East Side, an urban ghetto for many recent immigrants of the period. With the teacher’s help William Auerbach- Levy was enrolled at the youthful age of 11 in the National Academy of Design. During high school he was

Alliance Art School. By the time he was 25, his caricatures had earned him tame, and his career was estab-lished. A prize-winning painter and etcher, Auerbach- Levy received a Guggenheim Fellowship in 1929 for one of his paintings. His work was traditional in style, as he thought modern art had little merit.

His caricatures appeared in numerous publications including the New Yorker. Collier’s, Theatre Arts, Vogue, Vanity Fair, McCall’s, and Ladies’ Home Journal. Originally, he drew for the old New York World, but after the demise of that newspaper he was closely associated with the drama page of the New York Post and the Brooklyn Eagle. In 1948. assisted by his wife. Florence Von Wien, he summed up his career in Is That Me? A Book About Caricature. The book is a classic on the subject and contains sections about his career, along with a brief history of caricature and instructions on how to draw caricatures. A reviewer noted that William Auerbach-Levy had, with caricature, “the same indisputable authority as Freud on sex, Tilden on tennis, or Fanny Farmer on cookery.”

“It’s the first quick impression than counts.” said William Auerbach-Levy. He cautioned students. “Good draughtsmanship is indispensable. Caricature is an art of simple line, so faults in drawing are not easily

noted as much for his checkers playing as his art. At age 15 he won the citywide public-school checkers cham¬pionship. In later years he was a regular among checkers players at the outdoor tables in Washington Square Park in Greenwich Village, where he lived most of his life.

Following graduation from City College in New York, he won an art scholarship to Paris. Upon his return to New York, he joined the faculty of the National Academy’s School of Fine Arts and the Educational

concealed.” His own style was a masterpiece of the economical use of line, resulting in drawings with power and dignity. He emphasized the need for drawing for the specific type of reproduction used in a publication. For newspaper reproduction he recommended “pure black line or solid black tone” with some use of benday dot patterns for shading. Thousands of William Auerbach- Levy caricatures were published over his long and prolific career: not only famous people in the theater, but in the fields of literature, sports, politics, and finance. 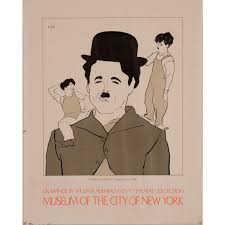 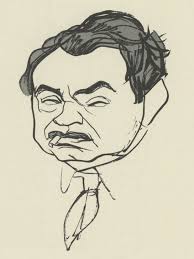