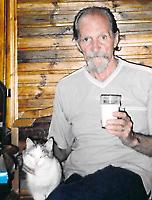 Stanislav Ashmarin was born in 1937 in Kharkov. He graduated from Baku Medical Institute.
His first cartoon appeared in the Youth of Azerbaijan newspaper in 1962 and the artist moved to Tselinograd (now Astana), the capital of Kazakhstan after graduating from the Institute.
From 1962 to 1965 he worked as an artist in the Molodoy Tselinnik youth newspaper and also published his drawings and cartoons in a central newspapers and magazines.
In 1971 he moved to Sverdlovsk (now Yekaterinburg) where he contributed his works to the “Na smenu newspaper and the Uralskiy Sledopyt magazine. He was the first artist in the USSR who draw comics for the PIF weekly magazine (Adventure and Fantasy).
Since 2002 he participated in an international contests.