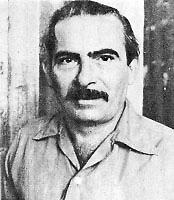 Ardion was born in Havana in 1931.
He has no art education. His talent as a cartoonist was revealed in 1961 when he offered his drawings to the editors of the El Pitirre and the Palante magazines.

For his political satire Ardion won a several first prizes at the Horacio Rodriguez Suria, the National Salon of Humor and in other competitions.