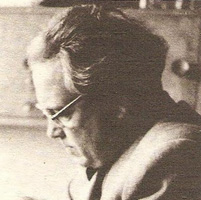 Boris Angelushev (1902-1966) trained and worked in Berlin from the early 1920s for more than a decade (returning to Bulgaria only in 1935) and was clearly influenced by the revolutionary events taking place then – and by the powerful graphics of Kathe Kollwitz of whom I have always been very fond.
A typical agitprop sketch of his headed the recent post about Romanian DNA and more of his work can be seen here. When I was in Sofia in January I was lucky enough to come across a large book which seemed to contain every single one of his works. Even although it’s all in Bulgarian, I considered it a bargain at 22 euros. I actually have a sketchbook I also bought then in the tiny eccentric gallery I blogged about at the time. It’s by an unknown artist – my knowledgeable Bulgarian friends agree that it’s quality work from the mid century and I have just realised it could be Angelushev’s since the old sketchbook carries an embossed Romanian-German title –“Album de schite-Skizzenbuch” – and he worked in both Romania and Germany.

I have the sense that Bulgarian painters are more numerous (proportionately) than British. I don’t pretend to know a great deal about British art (more about Scottish – the Glasgow Boys; the Colourists etc) – so Amazon delivered this week a book (A Crisis of Brilliance) about a group of 5 famous English painters of the early 20th century – Dora Carrington, Merk Getler, Paul Nash, Richard Nevinson and Stanley Spencer (I had only heard of the first and last). Certainly I could make a list of no more than 20 UK painters of the last 100 years – whereas my list of Bulgarian painters is almost at the 150 mark. And one of the difficulties about compiling the list is that quite a few Bulgarian painters share a family name – some are related (eg Dobre Dobrev senior and Junior) – but most are not. And this seems to be particularly true of names like Georgiev (3 in my list) and Ivanov (five!) The next two listings share an appropriate name for that part of the world.