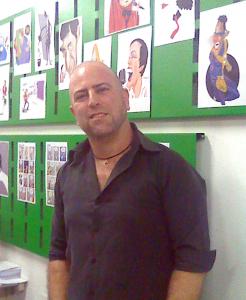 Born in 1972, works as an illustrator and cartoonist since 1998. He began illustrating the Newspaper Diario do Litoral for about three years . In 2001 he was hired by the Newspaper A Tribuna de Santos, where he still works, creating editorial illustrations, cartoons, caricatures, comics and computer graphics. He also illustrates the Expresso Popular Newspaper and popular columns from Paulo Coelho and Vicente Cascione on AT Magazine. He has published illustrations in the catalog of the Ministry of Health in Brazil, and the Book of Cartoon Global Heating, organized by Brazil Portal Cartoons. Also participated in the Humor Salon of Piracicaba, one of the most important exhibions in Brazil. Attended and held several exhibitions. Awards Honorable Mention at the Salon of Humor Street Children in Iran and first place in the Category Charge at Humor Salon Dino in Santos.