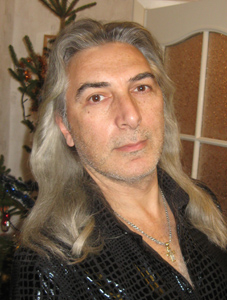 Born on October 16, 1955 in Kiev.
He graduated in Architecture from the Kiev Art Institute (National Academy of Fine Arts), the workshop of N.B. Chmutina in 1982.
1982-1986 — Architect in the Folk Architecture and Life Museum of Ukraine.
1986-1988 — Decorator at the University of Kiev.
Since 1988 he is a free artist.
His first cartoon was published in the Komsomolskoye Znamya newspaper in Kiev in 1984.
Then his cartoons were published in central and republican media such as the Soviet Culture newspaper (Moscow) and the Peretz magazine (Kiev).
He is a prize-winner of the cartoon competition in Tolentino (Italy) in 1993.
Since 1984 he is a member of the Archigum Kiev club of cartoonists.
skulprikatura.com