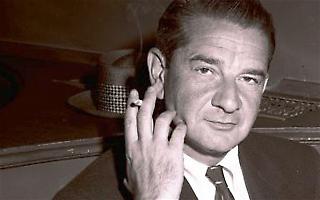 His cartoons regularly appeared in The New Yorker, and he also created a syndicated comic strip, Out of This World, which ran in 1956. There are many collections of his work, including Drawn and Quartered (1942) and Dear Dead Days (1959). His cartoons continue to appear in books, calendars and other merchandising. Typical of his work, one well-known cartoon shows two men standing in a room labeled “Patent Office.” One of them is pointing a bizarre gun out the window (and down toward the street) and saying to the other, “Death ray, fiddlesticks! It doesn’t even slow them up!”
He drew more than 1,300 cartoons over the course of his life. Those that didn’t appear in The New Yorker were often in Collier’s and TV Guide. In 1961, Addams received, from the Mystery Writers of America, a Special Edgar Award for his body of work.
Addams collected crossbows and used a little girl’s tombstone for a coffee table, but Janet Maslin, in a review of an Addams biography for The New York Times, said the “Addams persona sounds cooked up for the benefit of feature writers … was at least partly a character contrived for the public eye”, noting that one outre publicity photo showed the humorist wearing a suit of armor at home, “but the shelves behind him hold books about painting and antiques, as well as a novel by John Updike.”