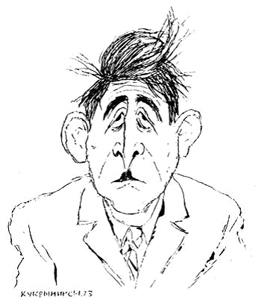 Mark Abramov moved from Ukraine to Moscow where he studied at the Moscow Civil Engineering Institute (MISI) from 1931 till 1936. During the 1930s, he and his brother Oleg published cartoons under the pseudonym Moa in satirical magazines and newspapers. After 1932 Abramov submitted his works to many illustrated magazines, including Krokodil, Ogonek, and Znamia. He also published his illustrations in local and national newspapers like Izvestiia and Pravda. During World War II, he designed posters for the TASS. Between October 1941 and April 1945, approximately fifteen of them were released. He continued to design posters after the war, focusing on agricultural topics. In 1964 he was given the title of Honored Arts Worker of the Russian Soviet Federative Socialist Republic.