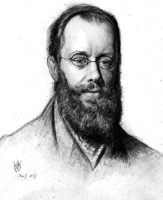 Born in Ilighgate Village, London. England, on May 12. 1812.
Known mostly for his literary nonsense in poetry and prose and especially his limericks, a form he popularized. His principal areas of work as an artist were threefold: as a draughtsman employed to illustrate birds and animals; making colored drawings during his journeys, which he reworked later, sometimes as plates for his travel books; as a (minor) illustrator of Alfred, Lord Tennyson’s poems. As an author, he is known principally for his popular nonsense collections of poems, songs, short stories, botanical drawings, recipes, and alphabets. He also composed and published twelve musical settings of Tennyson’s poetry.
Lear was already drawing “for bread and cheese” by the time he was aged 16 and soon developed into a serious “ornithological draughtsman” employed by the Zoological Society and then from 1832 to 1836 by the Earl of Derby, who kept a private menagerie at his estate, Knowsley Hall. He was the first major bird artist to draw birds from real live birds, instead of skins. Lear’s first publication, published when he was 19 years old, was Illustrations of the Family of Psittacidae, or Parrots in 1830. One of the greatest ornithological artists of his era, he taught Elizabeth Gould whilst also contributing to John Gould’s works and was compared favorably to the naturalist John James Audubon. His eyesight deteriorated too much to work with such precision on the fine drawings and etchings of plates used in lithography, thus he turned to landscape painting and travel.
Among other travels, he visited Greece and Egypt during 1848–49, and toured India during 1873–75, including a brief detour to Ceylon. While travelling he produced large quantities of coloured wash drawings in a distinctive style, which he converted later in his studio into oil and watercolour paintings, as well as prints for his books.[10] His landscape style often shows views with strong sunlight, with intense contrasts of colour.
Between 1878 and 1883 Lear spent his summers on Monte Generoso, a mountain on the border between the Swiss canton of Ticino and the Italian region of Lombardy. His oil painting The Plains of Lombardy from Monte Generoso is in the Ashmolean Museum in Oxford.
Throughout his life he continued to paint seriously. He had a lifelong ambition to illustrate Tennyson’s poems; near the end of his life a volume with a small number of illustrations was published. 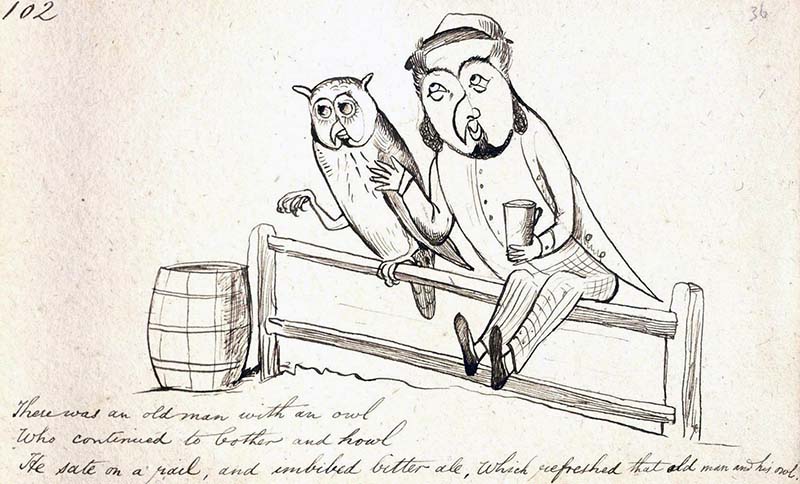