He was born in Istanbul in 1959. Studied drawing art at the Faculty of Fine Arts, but completed his education at the Cinema-Televisión Department in the university.
His great interest in cartoon appeared during high school years, later he worked for magazines Girgir, Firt, Laklak, Nankór, Deli. He wrote articles for Milliyet daily newspaper. 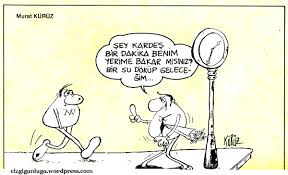