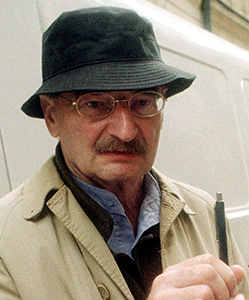 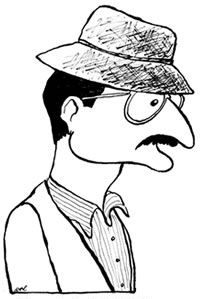 Sławomir Mrożek was a Polish dramatist, writer and cartoonist. In 1963 Mrożek emigrated to Italy and France and then further to Mexico. In 1996 he returned to Poland and settled in Kraków. In 2008 he moved back to France. He died in Nice at the age of 83.

Mrożek joined the Polish United Workers’ Party during the reign of Stalinism in the People’s Republic of Poland, and made a living as political journalist. He began writing plays in the late 1950s. His theatrical works belong to the genre of absurdist fiction, intended to shock the audience with non-realistic elements, political and historic references, distortion, and parody.

Mrożek’s family lived in Kraków during World War II. He finished high school in 1949 and in 1950 debuted as political hack-writer in the Przekrój. In 1952 he moved into the government-run Writer’s House (ZLP headquarters with the restricted canteen). In 1953, during the Stalinist terror in postwar Poland, Mrożek was one of several signatories of an open letter from ZLP to Polish authorities supporting the persecution of Polish religious leaders imprisoned by the Ministry of Public Security. He participated in the defamation of Catholic priests from Kraków, three of whom were condemned to death by the Communist government in February 1953 after being groundlessly accused of treason (see the Stalinist show trial of the Kraków Curia). Their death sentences were not enforced although Father Józef Fudali died in unexplained circumstances while in prison. Mrożek wrote a full-page article for the leading newspaper in support of the verdict, entitled “Zbrodnia główna i inne” (The Major Crime and Others), comparing death-row priests to degenerate SS-men and Ku-Klux-Klan killers. He married Maria Obremba living in Katowice and relocated to Warsaw in 1959. In 1963 Mrożek travelled to Italy with his wife and decided to defect together. After five years in Italy, he moved to France and in 1978 received French citizenship.

After his defection Mrożek turned critical of the Polish communist regime. Later on, he also protested publicly against the Warsaw Pact invasion of Czechoslovakia (1968) from the safety of his residence in France. Long after the collapse of the Soviet empire he commented on his fascination with Communism in a following way.

His first wife, Maria Obremba, died in 1969. In 1987 he married Susana Osorio-Mrozek, a Mexican woman. In 1996, he relocated back to Poland and settled in Kraków. In 2002 he had a stroke, resulting in aphasia, which took him several years to cure. In 2008 he left Poland again and moved to Nice in southern France. Sławomir Mrożek died in Nice on 15 August 2013. Not a religious person by any means, on 17 September 2013 he was buried at the St. Peter and Paul Church in Kraków. The funeral mass was conducted by the Archbishop of Kraków, Cardinal Stanisław Dziwisz.