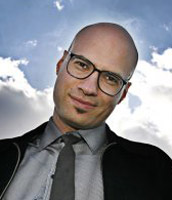 Was born on December, 9th, 1974, in Moscow.
In 1996 graduated from the Moscow State University of Geodesy and Cartography, Faculty of Cartography, specializing in cartography.
The first cartoon was published in 1990, in the Zaporozhye newspaper in Zelenograd.
Contributed to the newspaper Kommersant daily, the newspaper Izvestia, the newspaper Nedelya.
Made illustrations for magazines Playboy, FHM, ELLE, Domashny Ochag, Zhvanetsky Magazine, Crocodile, Cosmopolitan, Psychologies and many others.
Worked as a promoter in the club “Sixteen Tons” and was the first who brought to Moscow such bands as The Residents, Stereolab, Plaid, Laika, Pizzicato five.
Art director of the Moscow publishing house Zangavar, which produces illustrated books and classics of comic books for children and adults.