Born in Tokyo. Japan, on July 24, 1902. After studying under the famous cartoonist Ippei Okamoto, Shigeo Miyao began working as a regular for the newspaper Tokyo Maiyu Shimbun. where he drew political and social commentary cartoons. Since most other cartoonists were doing the same thing, however, he decided to try something new. In 1922, after clearing the idea with his newspaper, Miyao began drawing Manga Taro, a work for children. This six-panel piece took the form of pictures with a narrative, and it ran for over two hundred episodes. It appealed to children but also found an adult following and helped boost the overall sales of the paper. Later, Manga Taro was compiled into a book, most copies of which were destroyed in the 1923 earthquake that demolished Tokyo.
In 1924, undaunted, Miyao created Dango Kushisuke Manyuki, the story of a super-samurai boy who travels throughout Japan battling rogues, monsters and assorted villains. The characters all had amusing names, usually puns on names of food, and this contributed to their popularity. With this further success, Miyao firmly established himself as a pioneer in children’s cartoons and comic strips. He then began drawing comics for the magazine Shonen Kurabu, starting with Honao Bokosuke (similar to Dango Kushisuke Manyuki) and the classic Songoku. Songoku appeared in 14 episodes, and when it was published in book form it utilized word balloons rather than a straight narrative. It was an amusing, easy-to-understand rendition of the Chinese classic Saiyuki, which has often been a theme in Japanese literature (Osamu Tezuka and Toei Doga each made an animated version). Songoku, the hero, is a semi-supernatural monkey who journeys to India from China to obtain sacred Buddhist scriptures.
Following Songoku, Shigeo Miyao created a string of other children’s comics for Shonen Kurabu. such as Issun Taro (“One-Inch Taro”). Manga no Matsuri (“Cartoon Festival”) and Korufobi Karusuke. Miyao’s characters wore generally very independent, in keeping with the prevailing mood of Japan in the late 1920s, a period in which democracy and individualism flourished. In 1934 Miyao formed a children’s cartoonists’ association known as Doshin Mangadan. During the war he saw action on the southern front while serving in the Imperial Navy. He continued to draw literary cartoons for magazines in the postwar period but also pursued an active interest in Edo Kobanashi. or humorous stories from the Edo period of Japan (1600-1867), publishing several books on the subject. 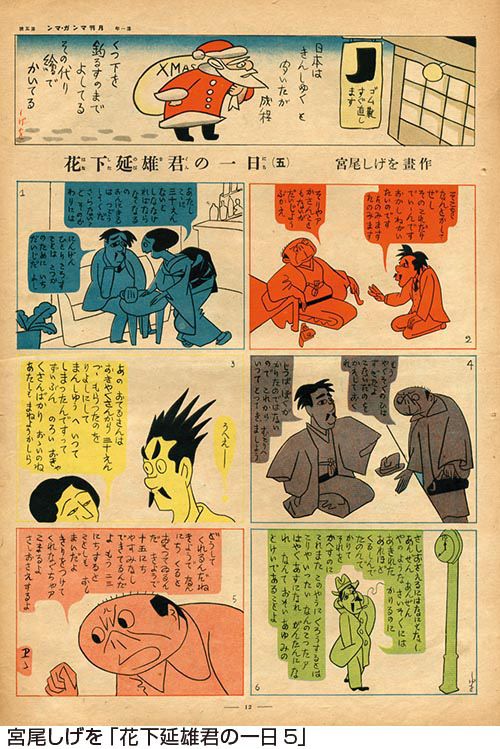