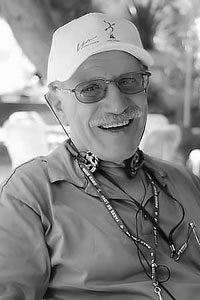 Alexander Naumovich Mitta is a Soviet and Russian film director, screenwriter and actor.
Mitta’s birth name was Alexander Naumovich Rabinovich. He studied engineering (graduated in 1955), then worked as a cartoonist in art and humour magazines. In 1960 Mitta graduated at the film directing faculty of the VGIK.
Mitta’s career as film director and screenwriter spans from the 1960s until the 2010s. Among the movies are Gori, gori, moya zvezda (Гори, гори, моя звезда, 1969) about actors trying to survive and work during the time of the Russian revolution or the high budget catastrophe movie Air Crew (1979). For his work Mitta obtained numerous awards in the Soviet Union and Russia.
In 1980, Mitta was a member of the jury at the 30th Berlin International Film Festival.
Mitta supported the Russian annexation of Crimea in 2014, even though he also noted that he didn’t like that it serves as a distraction for many from other problems Russia is facing.