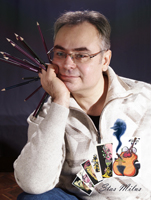 Was born on February 6, 1967 in Zaporozhye.
The first drawing was published in the newspaper MIG in 2000.
Published in newspapers and magazines: “Panorama” (Industrial Zaporozhye), “Mig”, “Saturday”, “Plus”, “Vsesmikh” (Canada).
Participated in the international cartoon competition “Satyrykon” (Poland).
Conducted two solo exhibitions in the exhibition hall of Photo Artists (2000-2001).
As a bass player he worked in many philharmonic societies of such cities as
Zaporozhye, Irkutsk, Khabarovsk, Magadan. He worked on the steamer “Dobrolyubov” river-sea.
Composes songs.
Performs orchestrations and arrangements for big bands and orchestras.