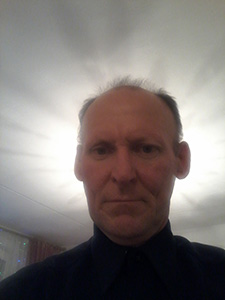 Was born on August 20, 1957 in the city of Zima, Irkutsk region in the family oа engineers and technicians.
Graduated from the Sevastopol Instrument-Making Institute, Faculty of Ship Power Engineering and Shipbuilding, specializing in Ship Power Plants in 1981.
In 1981 – 1991 worked at the Sevastopol Instrument-Making Plant (mailbox) as head of the Environmental Protection Service.
In 1990 – 1991    was a deputy head and chief editor of the newspaper “Advertising Bulletin” (the first newspaper of the Crimea with a computer layout) with a humorous insert “Gest”.
In 1992 – 1995 was a deputy director of the Zurbagan Music Center (professional recording studio), engaged in producing rock bands, organizing music festivals.
In 1996 – 2009  worked as producer, director of programs, advertising, music festivals (including All-Ukrainian – “Krammy”) – on radio stations Crimea Radio Rocks, Russian Radio, Hit FM.
The first caricature, created in co-authorship with Alexei Degtyarev, was published in 1977 in the newspaper “Crimean Komsomolets”.
Since the birth of the creative union and until 2009, he did not draw on his own, he was a creator in cartoon-tandems: from 1977 to 1990, with Alexey Degtyarev; from 1991 to 1994. with Alexander Shirokov; from 1999 to 2003. with Gennady Yakshin. Since 2009 – draws by himself.
Contributed to: all the Crimean periodicals, the weekly Sobesednik, the magazine Student Meridian, the magazine PET (Poland) – in co-authorship with Alexei Degtyarev; in the magazine “Rikker” (Estonia) – in co-authorship with Alexander Shirokov.

Organized: Crimean Exhibitions of Humorous Graphics (artists from Russia, Ukraine, Latvia, Lithuania, Estonia, Armenia) with the publication of the Catalogue of each exhibition in 1983, 1985, 1987, 1990 in Simferopol and Sevastopol art museums and in the House of Moscow (Sevastopol) in 2009.
Admitted to the members of the Leningrad Club of Cartoonists in 1984.
While working at Radio Rocks in 1997 received a prize in the nomination “The Most Original Audio Clip” at the Golden Advertising Advertising Festival.
During his time on radio and TV, he created more than 3000 audio and about 500 video commercials.
Composes music (jazz), writes poems.