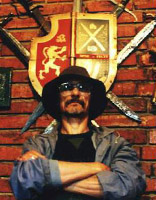 He was born in 1949 in Novosibirsk.
Since 1957 he lives in Moscow.
Graduated from Surikov School of Drawing and from the Faculty of Caricature by the USSR Union of Journalists.
Contributed to media as an artist – worked as an illustrator and cartoonist in many leading Moscow publishing houses.
In 1977 he delivered a speach at the Moscow International Committee of Artists (Moscow Joint Committee of Graphic Artists).

Participated in more than 80 exhibitions as an artist – painter.

Since 1987 is a member of the group of Moscow artists “The World of Painting”.

In 1989 participated in the European auction of contemporary artists in Versailles (France).