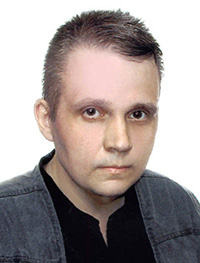 In 1992 graduated from the Tashkent Automobile and Highway Institute (after serving in between for two years in the army in the GBS).
But he did not go to work as an engineer, as he “felt for” caricature after publishing his first work n the magazine “Mushtum” in 1989.
In 1992-99 he worked as an artist in the newspaper “Pravda Vostoka”, as well as in several other publishing houses. He published his cartoons in various newspapers and magazines in Russia.
In 1999, having accepted Russian citizenship, he moved to Tambov.
From 2000 to 2010, he exclusively worked with the publishing house “Logos Media”, for which he drew almost 1400 magazine covers alone, not counting several thousand different drawings.
In 1994-2000 he actively participated in cartoon contests, receiving two main prizes (in Belgium and Peru) and a dozen of prizes of other kinds.