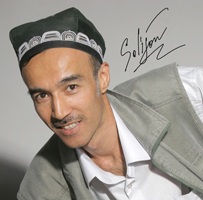 Was born on June 22, 1966 in Asaka (Uzbekistan).
Graduated from the Moscow State Pedagogical University, Faculty of Philology, and Tashkent Art College, department of painting.
Worked as a designer in Tashkent until 2007.
The first caricature was published in the Uzbek satirical magazine “Mushtum”.
He took part in many international cartoon contests.
Artist-designer of LLC “VADES GROUP”.
Member of the Creative Association of the Academy of Arts of Uzbekistan.