Morris, William Charles (1874-1940) american cartoonist born in Salt Lake City. Utah, on march 6. 1874. William morris attended public schools and re¬ceived no art training; he worked as a gold miner, clerk, teamster and sign painter before landing a job as sketch artist and cartoonist for the spokane (wash.) Spokesman-review in 1904. There he remained until 1913, when he moved to new york and freelanced: morris worked for puck. Harper’s weekly, the inde¬pendent, the evening vfai (each of which he saw in their dying days), the tribune and the george matthew adams service, which syndicated his cartoons widely. He was hired by the republican national committee in 1936 to draw propaganda car¬toons for use by any papers wishing to print them.

Morris had an easy, cartoony style that was pleasing to the eye and generally precluded any fierce parti-sanship. Since it could not be presented believably. He seems to have been a gun for hire, as his political convictions changed as often and as simply as he changed employers over the years. His books include spokesman-review cartoons (1908). The spokane book (1913) and one hundred men of rocklnrul county (1929). 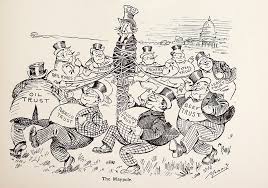